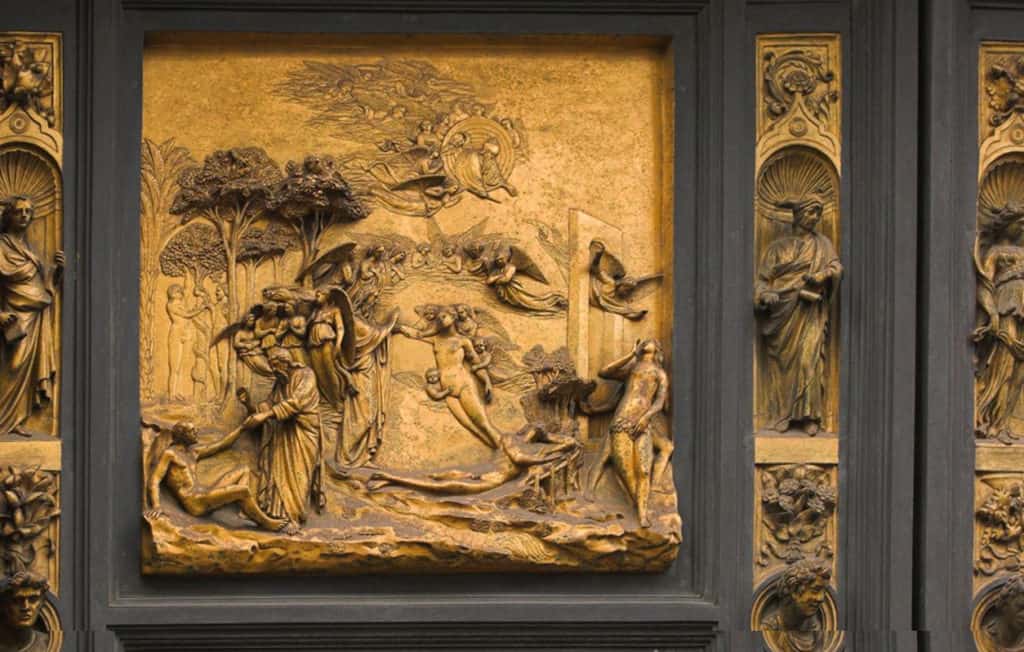 Lorenzo Ghiberti was an early renaissance sculptor known for his creation of the Baptistery of Florence. He lived between 1378 and 1455. His father was a goldsmith who lived in Pelago, Florence, Italy. Lorenzo was a student of humanism, which he incorporated in much of his work.

The young Ghiberti got much of his training from his father, who was a respected goldsmith. He was admitted as an apprentice at the Silk and Gold in 1392. By 1398, he passed the examination and became a master goldsmith at the guild. He left his town for Rimini to escape the plague scourge where he received training from painters. This skill was used to complete the frescoes wall at the Castle of Carlo I Malatesta.

In 1401, Arte di Calimala (known as the Cloth Importers Guild) commissioned the creation of two bronze doors to be used in the Baptistery of Florence. He won a competition where other big-name artists such as Jacopo Della Quercia and Filippo Brunelleschi had applied. Lorenzo used a trial relief he had created depicting the sacrifice of Isaac by Abraham. The guild wanted the bronze doors to depict various scenes in the Old Testament, but the plan was shelved in favour of the New Testament reliefs. This led him to be commissioned to work on the second set of bronze doors and the first given to another artist by the name Andrea Pisano.

His bonze door art had 14 scenes from the life of Jesus Christ, several evangelists and the fathers of the church. He mixed the gothic style with Renaissance style of art, which resulted in a greater illusion of depth. He completed the doors by 1424. His work was so good that the guild hired him to work on one more set of doors.

The next set of doors incorporated the style used in the earlier set. Each of the doors had five scenes from the Old Testament and a painter’s point of view, which helped heighten an illusion of depth. The figures closer to the viewer were extended outwards with background images accented with a few raised lines that made them look flatter.

Lorenzo took part in other works that included the commissioning of the larger-than-life-size sculpture of John the Baptist and two bronze reliefs for the baptismal of Siena Cathedral. He was also a classical collector. Ghiberti died on 1st December 1455 at age 77 in his hometown of Florence.