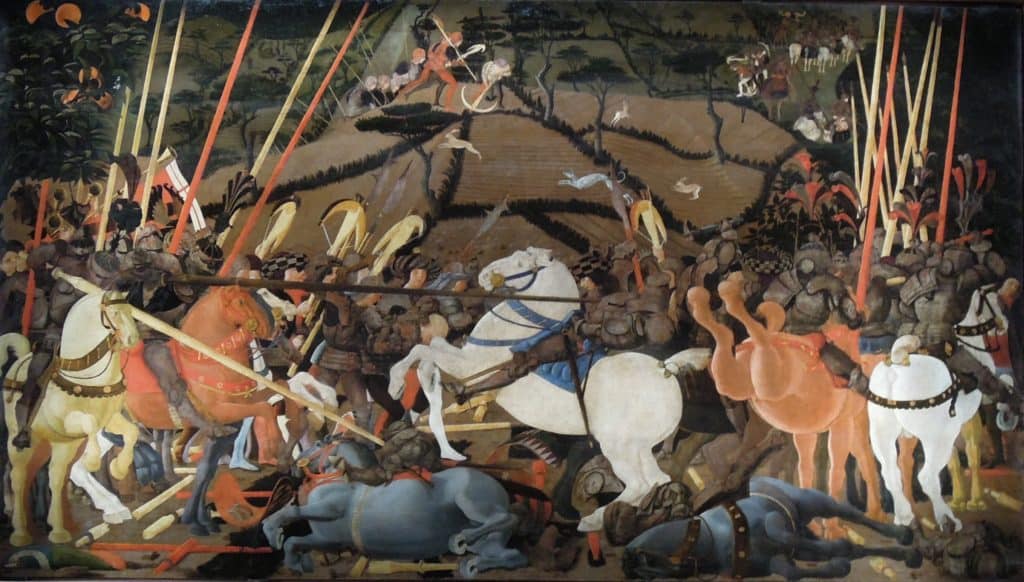 Paolo Uccello was an Italian mathematician and Florentine painter. His work strived uniquely to 2 distinct styles: the new heroic style of painting of the early Renaissance and the decorative late Gothic.

Uccello was born in 1397 in Pratovecchi. His father was a barber-surgeon called Dono di Paolo and his mother was Antonia, a high-born Florentine. He was given the name Uccello because he liked painting birds. Between 1412 and 1416, Uccello was apprenticed to Lorenzo Ghiberti, a famous Florentine Italian sculptor. Lorenzo’s sculptural composition and late-Gothic, narrative style greatly influenced Uccello. Also, it was around this time that Uccello started his lifelong friendship with the Italian sculptor Donatello.

Uccello was admitted to Compagnia di San Luca (a painters’ guild) in 1414. In 1415, Uccello joined Art of the Medici and Speziali, the painter’s guild of Florence. By the mid-1420s, the young Uccello had left Lorenzo’s workshop but stayed on good terms with him. Here is a website with Uccello’s biography: https://www.virtualuffizi.com/paolo-uccello.html

Uccello’s earliest frescoes which are now badly damaged, are in the Green Cloister (Chiostro Verde) of Santa Maria Novella. These frescoes represent episodes from the Creation. They are marked with a prevalent concern for classic linear forms and continuous, stylised patterning of landscape features. The frescoes follow the late Gothic tradition predominant in the fifteenth century in Florence.

Uccello’s most famous paintings are 3 panels that represent the Battle of San Romano, which depicts the events that occurred at the 1432 Battle of San Romano. By 1424, he was earning good money from his paintings. It’s from this year that the artist started showing his maturity in art. Most of the paintings Uccello executed were lively and his love for nature also helped him greatly.

From 1425 to 1431, he worked as a master mosaicist in Venice. However, all the work he produced in Venice was lost. He returned to Florence because he was commissioned to work on a series of frescoes in San Miniato al Monte cloister, which depict scenes from monastic legends.