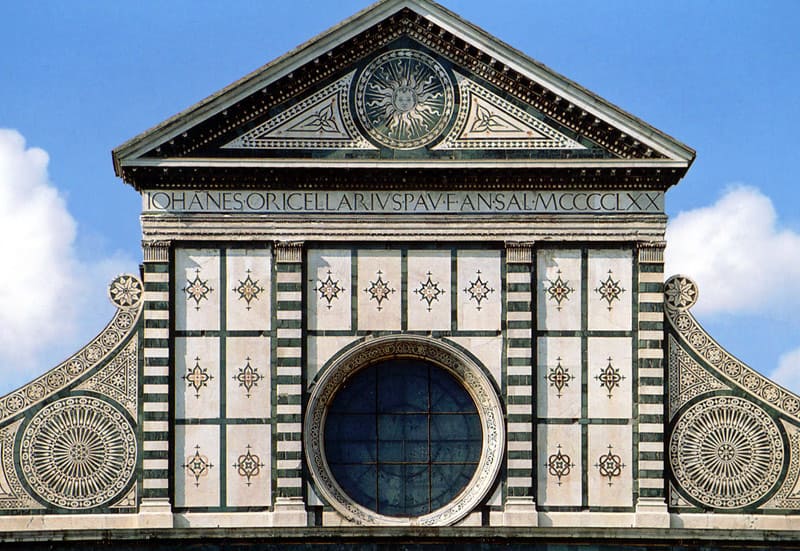 Born in Genoa, Leon Battista Alberti was an Italian writer, architect, and humanist who lived from 1404 to 1472. Through a combination of his theoretical writings on architecture, sculpture, and painting, Alberti is credited with raising these practices and methods from a level of mechanicals arts to one of liberal arts, bringing two separate areas of theory together to define how we see various art forms to this day.

As a philosopher and scholar who moved within both the vibrant Florence scene and the papal court of Rome, Alberti became a man who was involved in many of the key concepts that came to define the Renaissance. Many of his main focuses and concerns were those of societal reform and drawing influences from the art and cultures of the Ancient Romans. Something particularly prevalent in all of Alberti’s work is his contrast problem of man’s relation to society and what it really means.

In his early life, Alberti was well educated, studying classics at the famous Gasparino Barzizza school in Padua. He went on to study law at the University of Bologna. However, his studies in law had to wind down due to a combination of poor health and his burgeoning passion for both art and architecture.

He became known as a writer, cryptography and all-round intellectual and was employed by the then Pope Nicholas V to assist in the restoration of both the papal palace and of the Roman Acque Vergine aqueduct.

Two of the most revered books that Alberti wrote in the early stages of his adult career are De Picture in 1435 and De Re Aedificatoria in 1450. In terms of his architectural principles, Alberti brought together his flair for design and his uncontainable creativity by affirming the ethos that painting should be an important base for all architectures.

This came to full fruition in 1450 when Alberti took on the role of completing the then unfinished Malatesta temple, or Tempio Malatestiano. This was the very first building that Alberti undertook, and it is now famously known for its classical triumphal arch that was a favoured structure of his.

According to classical biographers, it is said that Alberti died in a “content and tranquil” manner in 1472. Thanks to his many interests and passion to bring different sectors of the arts together, he is considered to be one of the first quintessential ‘Renaissance men’.